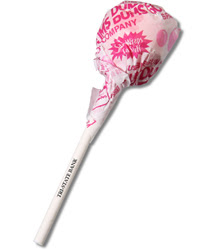 I walked into the bank the other day and there was quite a line. Luckily for me though, there was a bowl of Dum Dum suckers on the table that the line wrapped around. It brought back memories as a kid of going to the doctor and after your shot at least Dr. Churney or Collier would pull out the box of Dum Dums and I'd seek out the Root Beer flavor sucker and it'd make it all better. So I dug through the bowl and to my great enjoyment, I had a root beer Dum Dum.
Now, there were probably 7 people waiting in line and no one had a sucker. So I stood there just as happy as Chauntel is watching a Mary Kate and Ashley movie. But then the lady behind me, after noticing how happy that the sucker made me, dug through and got her one too. And she was then happy. But then one by one everyone else started to dig through and get one also. It was awesome!! It made me happy that they were finding such joy in getting their suckers. People coming in line after us weren't thinking twice about just grabbing one while they waited since everyone in line already had one too. One old guy with hearing aids took careful consideration as to which Dum Dum was going to make him the happiest and I think he made the right decision because he had the look after his choice that only comes when you've got the perfect Dum Dum flavor for the day.
So, just doing my part to spread cheer in this part of the kingdom. Sometimes you have to pull someone from a burning building (or hop in a car at a red light that just almost killed many and pull their keys out of the ignition and keep them from him till the police get there - ask me about that one some time) and other times it's just having the courage to go ahead and take one of those candies from the bowls at the bank. Next time you see one, go ahead and take one. The person in front of you wanted to, but didn't for some reason, and the person behind you is already eyeing the one they want but isn't sure if they are going to or not. Seeing you enjoy your freebie will make them want to be as happy as you are. You could even do as my brother, Mike, and make requests for the candy bowl.

Way to go Chauntel! You made my day by just posting that!

I love it!!! I am the one like you that takes the sucker, I always dig around to find the best one...watermelon. Waiting is better if you have something to suck on. Heck why not they are free, and not to many things are free. I think it is funny how no one will take one unless someone else takes one. That is awesome!!!

I faintly remember the car key thing, Jeremy. I want to see a blog about that one!

Submit a photo for the Dum Dums contest at www.lifeofdumdums.com for a chance to win $2500 & other neat prizes!