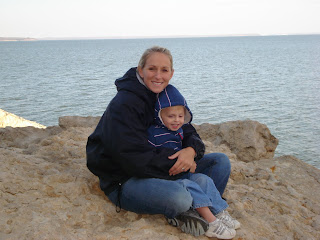 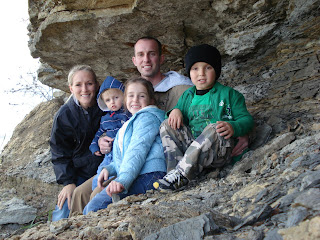 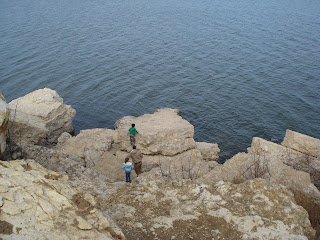 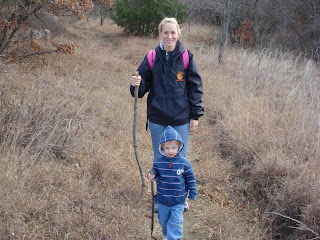 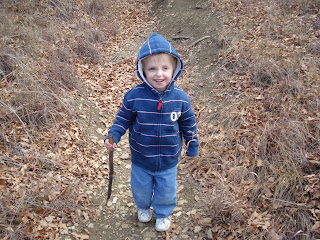 I have been wanting to go hiking or something "outdoors" for a while now, so this past Saturday when we were trying to plan something to do, Chauntel suggested that we go to Lake Texoma and find something to do there. She is looking for a place for girls camp also and since it's only a little over an hour away, we packed up the van and went. We were trying to get to a certain State park in Oklahome (half of Lake Texoma is in Texas, the other half Oklahome - hence "texoma" I just figured that one out yesterday)but somehow, we just followed some signs to Lake Texoma and found Eisenhour park which was about 40 minutes closer.
WE HAD A BLAST! We wanted to find some hiking trails and go hiking together and we found some great ones. The trail that we went on followed the bank of the Lake and there were some spots that you could go off the trail a little bit and climb down the "cliffs". We even found a beach that we climbed down a pretty steep rock area only to find out that a little bit down the trail there are some steps down to it!
At first Isaac was too scared for whatever reason to even go to the trail (I did tell him before we went that I hoped to find a bear on the trail so I can fight it), but when we hit our first chance to rock climb, you couldn't stop him. He was scaling these steep climbs and just jumping all over the rocks - making me nervous and proud at the same time. Everyone had a great time. We found some walking sticks for everyone in the woods along the way that the kids used.
Isaac called hiking "traveling" and would say, "Let's travel this way now" or when it was time to go he said, "ok, let's eat in the van, then travel some more". He did not want to go.
As soon as we were leaving, the kids were already planning our next trip back.

That's awesome! Oh and I love the new header. Isaac's expression is totally one of "I'm soooo much better than you!"

That sounds like so much fun. I had no idea there was hiking and stuff like that to do so close. Looks like you guys had a blast. Cute pics!!!

It looks like you all did have a blast. It's awesome you guys found a place like that so close. You all will turn into little outdoory's yet. Just remember to request Dusty in the summertime so he can be your guide--you'll find stuff that was right in front of you that you never imagined!

That looks like a lot of fun. It's too cold for us to be outside anymore, even when the kids beg- I'm just a whimp though.
Happy Holidays