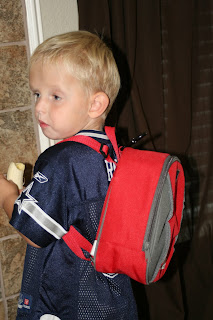 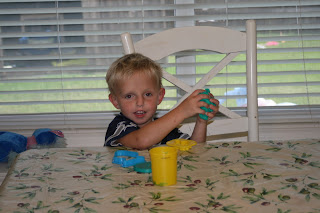 Jackson is in a Preschool Co-op this year. He had his first day on TH. It was so cute. He's been talking about going to high school. I keep telling him, it's preschool, but I guess that's not cool enough. I bought him a little back pack lunch box but he wants the back pack and he wants to carry a lunch box.
He's been wearing underwear for four days with only one accident. I'm totally excited to be done with diapers (for a while anyways:) I wasn't really sure he'd ever be willing to try.

I just want to kiss those cute little cheeks! I love the length of Jacksons hair. He is an adorable big preschooler now!
So Cute! Love Mom S

What a freakin' cute kid! I miss you guys, I wish I was still really close so I didn't have to keep up with the kids through a blog. Staying in the same house was way more fun!

How precious! That's all I can say. Every blog post makes me miss you guys more and more!