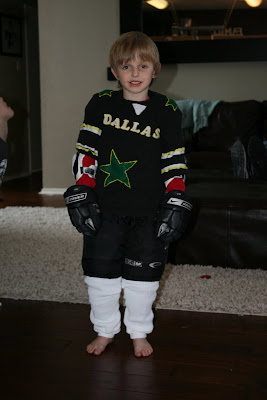 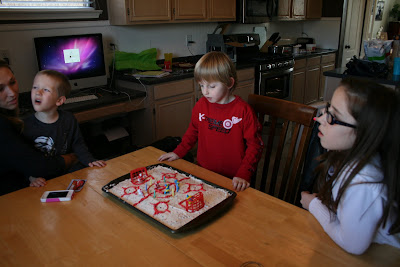 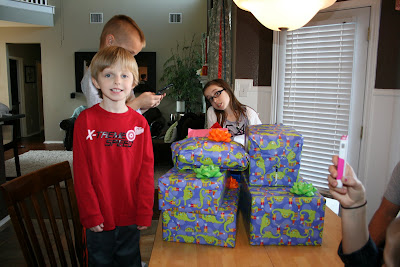 It's been 13 days since his birthday. Man, am I slacking in the blogging. We had so much fun (even though most of us were sick) We had Kendall, Ryan, and the boys visiting. So that was a special treat on his birthday. We were supposed to go to a hockey game that night but we were all too tired to go.

Jackson got all the gear he will need to play hockey this summer season. There is A LOT of gear needed for hockey. Which I guess is a good thing, so he's protected against the ice, swinging sticks, and flying pucks. Jackson informed me he doesn't want to loose his teeth like a hockey player:) I agree with him. Keeping all his teeth would be a very good thing to shoot for. His favorite, by far, were the hockey glove. He is most excited about throwing them down on the ice and then having a hockey fight:)

These new Great Sounding Headphones double up as a Stylish piece of Jewellery Beats By Dr Dre Headphones, which would much appeal to the Middle Easts Fashion Conscious Consumers Chaussures Nike. Heartbeats by Lady Gaga are engineered to deliver all the music the artist intended you to listen to, with wonderful sonic clarity, pounding bass, and all the power demanded by todays music Burberry Handbags Outlet.The self-inspired design, including every detail developed with Lady Gaga, is both a distinctive reflection of Lady Gagas style and fashion sense as well as her dedication to the sound quality of her music and the way it is heard Mulberry Handbags Outlet. Lady Gaga explains her motivation be
hind Heartbeats by Lady Gaga, In the deepest hour of the night, I confess to myself things; I would die if I was forbidden to write, forbidden to love Dre Headphones, or forbidden to fashion Polo Handbags Outlet. Chaussures Nike Homme

Many of us are not versions to state many of us said therefore, but also in this case, people soft did it is known as. Potentially one of the largest fresh fails that will emerge from CES is the go to this Monster in addition to Defeats by simply Dre will probably technically be separating their particular partnership as soon as the stop for this season. This kind of provides a good five year operate which expanded a high-end headset target a good screeching end, putting some sort of mountain peak involving alternatives on often conclusion. Which means that monte next intended for frequently firm? Increasing very likely to choose wherever, and most importantly, should we remain qualified to seize a good wonderful set of two the ones Eliza Yost Specialit Special line headphones in the event the breakup comes about?
But also in most signification, your dissolution of the crucial alliance generates a tanks with inquiries Monster Isport Earphone. Initially, where's Monster apt to be intending next? If you were seriously next some of our policy with the current earbuds in order to emerge from this company, it appears that a Hi-Fi and also wire maker will probably be using knowledge it's actually harvested in recent times in addition to dropping the idea straight to further headphone creations. All of us fairly recently smashed a story because Lance Armstrong iSport in-ears, which in turn look for end up being among the new flagships Monster wants for you to blow-up inside the forthcoming year or so. Monster Trubine Earphone

You made some good points there. I did a search on the topic and found most people will agree with your blog.

Office 2010 With improved picture and media editing features, it's easy to add creativity to your work and make your ideas stand out. Whether you're delivering a presentation to your colleagues or classmates, creating a company brochure or a personal invitation, Microsoft Office 2010 empowers you to be your own graphic designer.