We went to an Astros game on Monday night. We played the Cubs. They absolutely creamed us. Their pitcher almost pitched a no hitter. I think we had one hit in the 8th inning. So not much action. It made for a short game, which allowed us to stay the whole game even with kids. Kendall went with us. It was great to have her there to help us.

Yesterday (Tues) it was in the 90's so I took the kids swimming with some friends. We had to drive to three different pools before we found one that would let us in. They were all filled to capacity. The kids were so upset everytime we had to leave without swimming. We eventually found a pool and the kids had a great time. The pool we got into is the same one they'll have lessons at in a few weeks.

Jackson have four shots yesterday. He wieghs 11lbs. 15oz. under the 5%. He's 24.3 inches long 25% and under the 5% for his head. My doctor called the nureosurgeon and Cranial facial specialist when I told him we did not understand why they were wanting to wait so long. That was really great of him. He's really been on the ball and proactive for us. So I got a call yesterday from the nureosurgeons nurse. We need to set up an appointment with an optimologist and a prostectic specialist. The optimologist will check his eye sight before and after surgery. The prostectic specialist will measure his head for a helmet. We didn't know that he'd have to wear a helmet after surgery, but they told us yesterday that he would. We also have to set up for two adults with the baby's blood type to donate blood for the surgery. They'd like to do the surgery early November, but they have to schedule it with both doctors and the facilities. Then they'll get back to me and set up a pre-op visit the Tuesday before his surgery. So basiclly in one phone call we learned more than both visits to the doctors. I feel pretty good about everything now.

While Jackson was getting his shots, the nurse asked me to hold Jacksons hands while she held the feet. With out hesitation Isaac ran over and grabbed Jackson's hand. It was so sweet. But as soon as they gave him his first shot, Isaac covered his mouth in astonishment and back pedaled away from the baby. Within seconds Isaac, Makayla, and Jackson were all crying. I didn't know who to comfort first. It was sad but we got through it.

Melissa Webster (My sister-in-law went into labor last night) 6 weeks early. Her water broke before 9 pm and now at 11:55 am she still hasn't had the baby. I hope she's doing ok. We're so excited for her. They're naming the baby Evan. 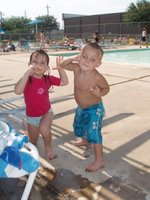 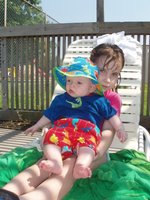 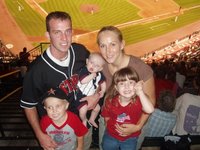 That is disappointing about the game was it kind of boaring. That is really sad about the swimming pools. I have never heard of such a thing. So that are waiting until he is 10 months. What happened to the 6 months? I so feel for you and your doctors office visit. I really hate going to the doctor. It is always awful.

I LOVE the pictures that you are always posting. They are classic. I started to cry today when I saw them becuse I just miss you guys so much!