Helmet a little too late 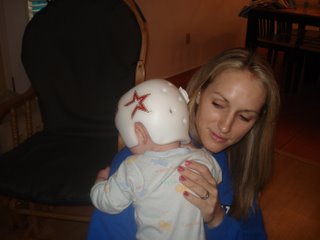 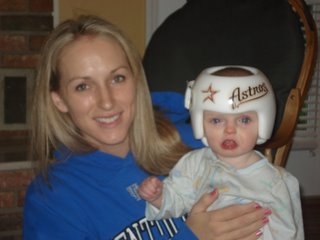 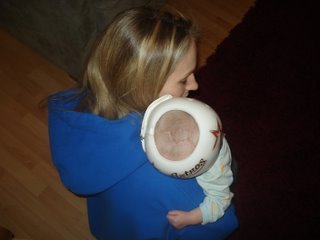 Jackson fell out of his crib Sunday night. Well actually, his crib broke and fell on Makayla and tossed Jackson on his head. I wasn't to worried because he didn't have a knot or bruise. The next morning however, we discovered that Jackson had thrown up in the night. He threw up all day and slept most he day. I started to worry that maybe it wasn't just the flu, but that maybe he had hurt his head. I had been trying all morning to get into the doctor but they couldn't see me til 4:30 and at that time Jeremy got a hold of his surgeon both Doctors said it wasn't a bad idea to go to the emergency room but his surgeon wasn't too worried and thought it would probably be a waste of time and money. It would have probably cost us around 800 to 1500 dollars. Ouch! (he would have had a CT scan)

by around 5 he ate and started talking a little and smiling so we just checked on him a lot thought the night. He woke up twice at night and I gave him water and yogurt which he didn't throw up and he hasn't thrown up since about 8:30 last night.

Today he's wearing his helmet every other hour except for when he's sleeping and in his car seat. He doesn't like it very much but I guess he'll get used to it. Tomorrow he'll wear it for 2 hours then take it off for one. He won't wear it while asleep or in his carseat for a few days. His fifth day wearing it he'll keep it on 23 hours sleeping and in his carseat. So from then on out he'll wear it 23 hours a day. He'll take it off one hour a day for bathtime and I'll clean his helmet and make sure it dries completely.

Yah, he has his helmet. I am so glad. So did they make him another one or find ours? It sounds like for a few days it is going to be alot of work. Hopefully he will get use to it. I love the stickers. It adds something to it. So how long does he have to wear it for a month? Sorry he was sick. Carter was sick on Sunday. He throw up for about 3 hours and then looked awful the rest of the day and then was fine. I am not sure what he had. I wish they could tell you how they felt. His crib fell that isn't good what happened.

love the stickers you should have got him Dallas Stickers. I guess he is representing Houston. I love you and and god luck with the keeping the helmet on all day.

My goodness. I bet you had Makayla and Jackson freaking out!! I am so glad he is OK. I love the little helment and stickers. I was wondering if they gave it to you that way or if you put them on there.

I sure do miss that precious little boy!! :) Give all of your kids a hug and a kiss for me!!!