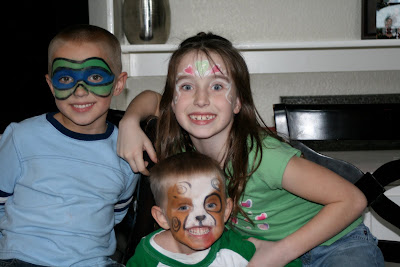 Last Saturday we took the kids bowling. It was so fun. Isaac beat everybody. He broke 100 (with bumpers of course) However Jackson several times didn't need the bumpers. He was able to get his going down the middle of the alley without them. We had a lot of fun watching the kids get excited about bowling. After bowling we went to CiCi's pizza (because mom loves the Cinnamon rolls -yummy)
At CiCi's they had a lady practicing face painting which normal we would never pay for something like that, but she was not having a whole lot of customers. Isaac was a teenage mutant ninja turtle, Jackson was a puppy (so of course he walked everywhere on all fours the rest of the day), and Makayla was just beautiful.

You guys do the most FUN things! Merry Christmas, Love you, Grammy

Awesome blog Adam!! deneme linki I saw you all in Buffalo and the show was incredible, tatil köyleri the best I've ever seen and I can't wait to see the show again in Rochester! It's so great to hear you're having a good time. escort bayanlar istanbul met you in Cleveland and you seemed so escort ankara If things go my way, I'll be able to catch up with görüntülü chat sitesi toptan mallar satış sitesi toptan havlu deneme travesti
derteg deneme escort istanbul If you don't know how to spot the difference, just watch any of the Filipinas buying and you'll soon catch on. istanbul jigolo Crab-sexers par excellence, it seems there's nothing these people aren't good at! Hızlı ve Öfkeli 5 izle