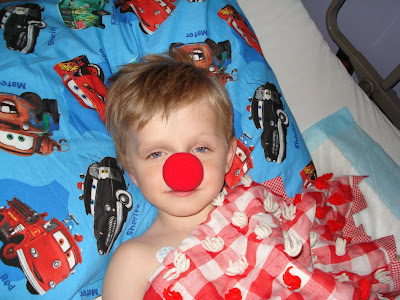 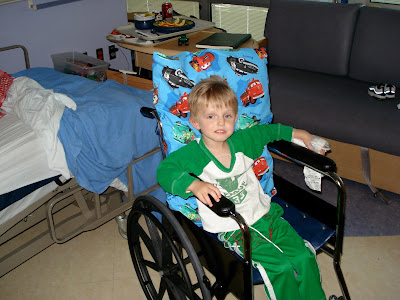 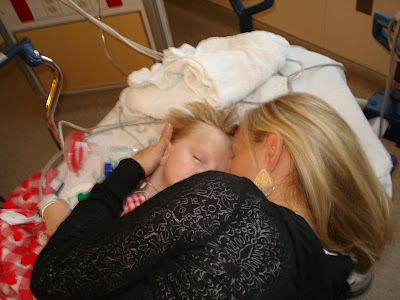 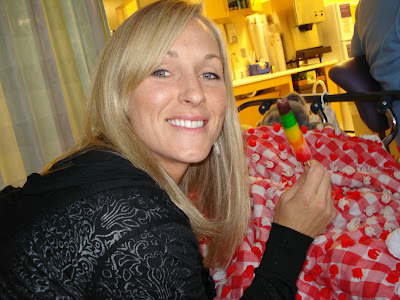 Jeremy mentioned that I should go ahead and write a little about my experiences at the hospital.

Jeremy and I were both able to be at the hospital when Jackson went into surgery and when he came out. We weren't sure we'd both be there until they moved his surgery back a few hours. (Isaac also got a fever the night before, Jessica watched him for us because we couldn't send him to school and we both really wanted to be there. I felt really bad leaving Jessica with our sick kid, but it really meant a lot to us) I was so glad to have Jeremy there. While Jackson was coming out of anesthesia, he totally freaked out. Well he was doing fine- until he saw me and then he went crazy. It was really scary because they wouldn't let him be held, sit up or anything. So comforting him was a lot harder than his other surgeries. After Jeremy and I held him down and the nurses pumped him full of meds, I layed down with him and half-held him as much as I could. The next few hours were hard because he wanted to be held and we couldn't. He kept trying to rip his IV's and cords out. He also kept yelling to go home and yelling at everyone not to touch him.

Jeremy went home to get the kids to bed and see them off to school the next morning while I stayed the night with Jackson. I was so afraid for Jeremy to leave me alone. I layed in bed with him most of the night to keep him laying down and stop him from ripping anything out. It was a long hard night, but the next morning everything got a lot easier. Jeremy brought up a Kilan movie (the only t.v. he'll watch) and Bella (his very best friend) came to visit, both really helped raise his little spirits. He kind of had a big attitude so it was nice to have my cute sweet Jackson back.

His most favorite thing at the hospital was the playroom. He loves bowling. He loves bowling with my kitchen cups, on my cell phone, and at the bowling alley. The playroom had a Wii and of course our little bowling protege loved bowling on the Wii. It's all he wanted to do there. When it came time to go home, he didn't want to leave the Wii or the wheel chair. He really wanted to take them both home with us:)

Jeremy spent the last night with Jackson and I stayed at home with the older kids. When I was leaving to pick the kids up from school the nurses had him standing up and taking steps. I was so sad to leave and miss all that.

Now we're home and he's a little timid to do anything. He keeps wanting to do things but is afraid to stand and walk. I don't know what we'll do for the next 6 days. I'm scared to let him do anything also.

jackson looks so big and so handsome with his long hair...it's so shiny and blonde! what a nightmare...i am so, so, sorry. you are a tough, tough lady chauntel. after the surgeries, you deserve a vacation. maybe you should get a wii, might make things less stressful for you and keep jackson "safe" :)

I'm so glad that everything went so well. I am sure it is hormones, but I cannot stand to look at that picture with Jackson asleep and you laying with him. it chokes me up. Also the pic of him in that wheelchair beside the Cowboys helmet got me too. I think because it puts in perspective how such a little guy is dealing with such big "stuff". I am sure it was so hard knowing that you couldn't comfort him when he was freaking out so bad. He's so sweet, but he knows what he likes and doesn't like. :-)

I love you guys and good luck to you in the next few days with him. I am sure that it will not be easy. The harder part will be keeping him from doing too much when he starts feeling better.

Miss & love you all.

Okay, so I hadn't even seen the other pictures below. Now the people at work are going to wonder about me. I can't stop crying. The one with Jeremy and the guitar really got me because I know how much Jackson loves it when Jeremy sings to him. and the one with his little friend visiting and the one with Kayla & Isaac there and the one with the Wii.

You guys are wonderful parents.

By the way, Jeremy, you still have a huge melon head. ha

I am so glad everything went well. Let me know if you need anything at all. Get feeling better Jackson.

Our family has been praying for you guy, and we continue to pray for healing.Love sent your way...! God Bless and your always in our prayers and thoughts.

I am with everyone else crying looking at the pictures. It's not hormones, it's just tenderness, love, overcoming obstacles and raw human emotions that come with such big challenges. Thank you so much for posting your experiences and pictures. Jackson couldn't be with greater parents who are as loving and understanding as you two. God bless you as you continue to go through the healing process. We love you so much.

Jackson is such a trooper! We were so amazed by him on Sunday just being himself after such a big week! He was back to himself already.....
I am so proud of you Jackson for being so strong. I am having so much fun being your Sunbeam Teacher!