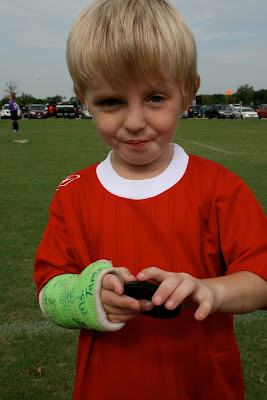 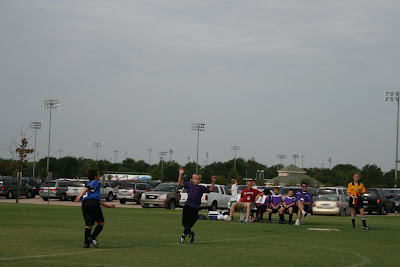 I love watching soccer. It's so much more exciting than watching baseball. Jackson and Isaac had their first soccer games of the season. Isaac played one season of soccer a few years ago, when he was 4. So this has been a very new experience for him. His first practice was really rough, but the next two practices and the game today were amazing. He's doing soooo good. Jeremy and I just want the kids to be involved in something that challenges them, makes them feel part of a team, gives them exercise, and confidence. I'm really hoping this will be fun for Isaac. He was so excited after his game, because he SCORED A GOAL, kicked the ball right in a boys face, and kicked the ball at a kids feet and made him do a complete flip in the air. He can't wait for his next game.

The great thing about soccer compared to baseball is all the games are on Saturday, instead of on a school night late at night. He doesn't focus well at night.

I can't even begin to explain the joy Jackson gives us. He is so happy and always ready for anything. He scored THREE goals (the first goal of the game and season), and almost TWO more. He was such a hustler. And so FAST. We're used to him racing Isaac and being so upset that he can't beat Isaac in a race (and of course Isaac won't ever let him win) But with kids his own age, he was so quick!