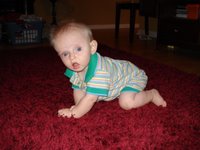 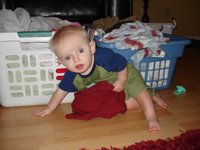 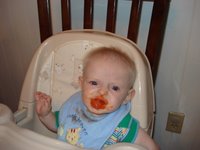 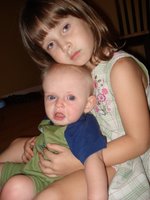 heres the pictures i was trying to upload to my last post. these pictures are of jackson crawling, getting into my laundry baskets, eating carrots, and being taken care of by sissy. jackson stood up to the laundry and than wasn't able to get down. the next day he stood up to a toy box and couldn't get down. he was screaming until i went to check on him. my kids are the worst at getting in to the clean laundry and throwing them everywhere so they can play cars in the baskets.

i don't know if i've ever mentioned how much i dislike dealing with health insurance and making doctors appointments. everything is so confusing and they're always so slow at dealing with claims. i won't be surprise if we get sent to collection for a bill we've never recieved and aren't even responsible to pay for.

makayla is becoming such a fish in the water. she wants to go swimming everyday. it's kind of hard with three kids but i usually trick someone into going with me (poor kendalls had her fair share of dealing with my kids at the pool.) she's now jumping into the pool and diving for toys and than swimming to the edge.

jeremy and i have been looking at vans. (online) we aren't brave enough to go test drive yet. sometimes we are such wimps when it comes to buy things. we like the honda odysses. maybe by december we'll commit to buying one.

we went to the children's museum today. which is always alot of fun. i don't know why i don't go more often.

jeremy is planning a BBQ for all of his employees.(25 people at least+family) it should be pretty fun. he bought sooo much meat. he could feed the whole ward. i'm trying to plan some other food but if jeremy had it his way it would be only steak, steak, and more steak.

Oh my, how your angels are growing! I can not believe how Jackson is looking like such a big boy, Makayla looks so pretty with her bangs cut, and where is Issac? He probably could not stand still long enough to get a picture snapped by his Mom. I am so glad that Makayla swims so well.Does Isaac like the water as much too? They are sure getting big. When I saw Jackson, I thought that those were sweet potatoes! It is so good that he loves his veggies. I love you guys and miss you even more!!!!!! Thank you so much for your blog. I check it everyday. Love you and can not wait for pictures of the company bar-b-que! Love, hugs, and kisses, Grammy and Mom

Jackson is SOOOOOOOOOoo adorable. his hair looks like there might be tint of red in it, so cool! ^_^ His face doesn't even look bad at all. ^_^ I love you all and I wich I could see you more often.

Your children are darling. Look at the cute jackson getting around at such a young age. Makayla is such good help to you isn't she?! I hope the kids will let you get a family photo one day soon. I remember how much work it was to get everyone ready at once for a picture! But I love to have them now on my wall to look at when I miss the old days. Love and hugs t the kids! Mom