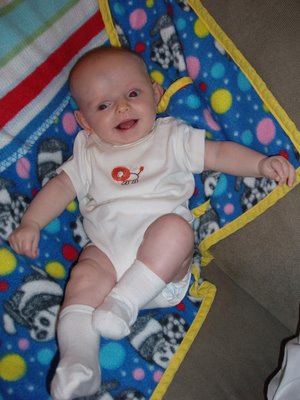 Today was Jackson's appointment with Dr. Hollier. He's a cranial, facial specialist. He told us that Jackson has Craniosynostosis (his skull has fused together, when this happens the bones stop growing.) Over a long period of time this would restrict brain growth and cause brain damage. He will have a CT scan on Monday and than we'll see Dr. Megahead. Jackson will have to have surgery at around 9 months. They wait till 9 months because this is a pretty major surgery, and his skull will be easier to sculpt by then. He'll probably start to look a lot worse until he has surgery. After surgery he'll have to stay in the hospital at least a week. Then my guess is he'll have to wear a helmet till he heals, I'm not sure. The doctor said he'll have a scar from ear to ear across the top of the head (and may need another surgery as he gets older for cosmetic reasons).

We are not as worried as we might should be. We have so much faith in the Lord. We know that he wants the same things in life, for Jackson, that we as parent do. We are so lucky to have been given such a beautiful and happy baby boy. What a blessing to be given the gospel and have the knowledge that we do.

Thank you for letting us know how the appointment went. Mom called this morning and explain a little bit. I am so glad you guys went in an at least know what is going on and what you will need to do. I am sure you feel better knowing what is going on instead of wondering what is goin on. I agree with you it is nice to have to knowledge and faith that we have. It would be so hard if you didn't. Not that it isn't going to be a long process and probably very trying. But I know you guys are wonderful parents with great faith. Jackson is blessed to come to a wonderful home.

Rochelle couldn't have said it better. I too know that this will be a trying time but at least you know what you have to do. You have started a wonderful family and have the Priesthood in your home and are surrounded by friends that love you and you have a lot of people to help you through this.

I love you all so much and I wish I could be there to see baby Jackson and your other two munchkins (and Tendull). I am going to the temple soon and I will put your names on the prayer roll and keep you all in our prayers.

One thing that I am gaining a testimony of lately is that Heavenly Father truly does not give us challenges that are too big for us to handle. If we tried to handle them ourselves they would be, but that's why we are here; to be stretched and pulled and molded into what Heavenly Father and Jesus Christ knows that we can become.

Heavenly Father has his hand in every aspect of our lives from Makayla praying for it to snow to Jackson's health. I know that He is with Jackson and He is especially with you and Jeremy as you come to Him in prayer and guidance for your family.

I love you so much. I wish I were there with you. Thanks for keeping us posted and know that you are loved more than you can comprehend.

We feel very lucky to have spent a week with you guys and to have gotten to know Jackson. He is such a sweet little guy. I know he is in the right home. His trials will be hard, but with your help along with Heavenly Father, things will work out.

Doing what the Lord would have you do as parents is paramount to the strength of the family. We will always have trials. We will always be tested in some way, but it's how we make it through those trials that really counts. You are always in our our prayers, and will always be a speaial family in Heavenly Fathers eyes.

We love you all,