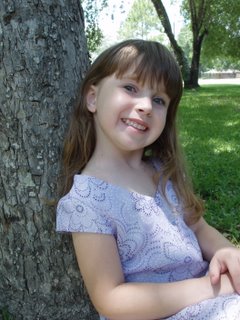 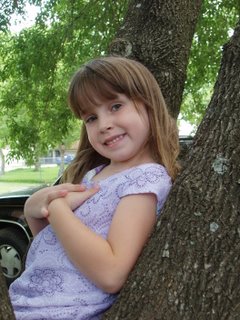 Makayla gave herself bangs today. I was in the shower ( it's either when I'm in the shower or feeding the baby that all mishaps happen and the house gets bulldosed) She's been asking for me to cut bangs and to cut her hair in a bob for the last year. I guess she was sick of waiting for me to agree. It's not so bad except they're way too thick. I'll have to grow 2/3 of them out again, what a nightmare it is to grow out bangs. She sure does think she's hot stuff now though. It could have been worse, like when Jillian or was it Bailey cut all their bang off.

It wasen't me who cut my own hair. I think she looks so cute. they don't look bad at all. I think she need to be a hair dresser when she gets older.

i think Makayla looks beautiful with bangs!!!!They make her look older. It could have been so much worse. It was Jilian that cut her bangs to the skin!

Wow bangs. She did a great job. I am really hoping Kamden doesn't do that. Not because McKayla doesn't look good or Kamden wouldn't it is the growing them back out I hate too.