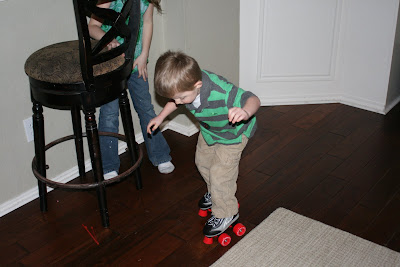 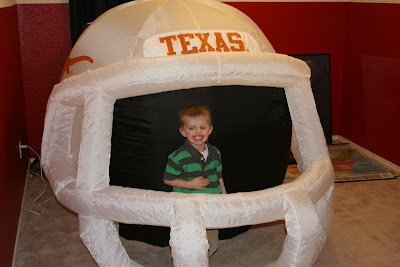 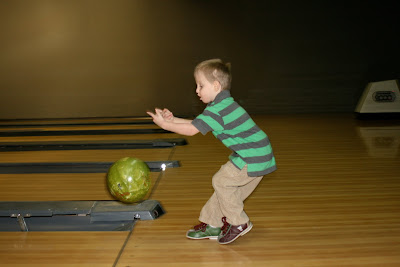 Jackson turned 4 on Wed the 10th. He's been telling me that he was going to get a blow up helmet for his birthday, so I'm glad I found one for him. He wants me to figure how to sew a tunnel through the middle so he can run through it like a football player. I don't know how I'm going to do it, but I'll try. Hopefully I don't ruin it.
We down loaded University of Texas Longhorns fight song. So I play it while he plays in the helmet:) It's really cute.

We went bowling for his birthday. He loves bowling. If I would set up pins for him he would bowl all day. sometimes he gets out cups and bowls with them:)

He also got roller skates. Makayla got some for Christmas and Jackson loves wearing hers around the house. So I got him his own pair. However his look deadly. It makes me nervous when he wears them. He did really well with Makayla's that are huge. I just thought he'd do better with ones that fit him (wrong)

Happy birthday Jackson! I love the helmet I have never seen anything like it.

Seriously awesome you found a helment like that. It's like Evan telling Melissa he wanted a dog that swam in water (toy) for Christmas and she just happened to see one and got it. SO CUTE about the fight song!!